It's Halloween! Happy Samhain to all of my pagan friends of that persuasion.

I like wrapping myself up in a costume; it's fun to be able to escape into that other mode of self, where you aren't you: you're the party version of yourself, the version who's given themselves licence to be just a bit silly.

I've been leaning on a single costume for much of the last decade, one that works for me on October 31st and at the Renn Faire equally well: A Wizard. I have a staff, cloak, large arcane tome, and boots. In some ways it's more of a solid start to a costume, I have all of the ephemera, but not the shirt and pants. I hope to pick those up before next summer.

This year, I'm going to try and pull off a pirate outfit. I've got a blue corduroy jacket with red lining that's been vaguely piratical for years, so I should be able to pull it off with a certain amount of ease.
Posted by Don Schlaich at 1:00 AM No comments:

Get into the Road

I don't own a car, and for all that I waxed on about the cars that I've owned, I feel happier in my current lack than owning a rolling bomb that threatens my wallet with desecration on a regular basis.

For those of you who think I'm being a bit sour on the principal of car ownership, I point you to the record of vehicles I've owned. The only issues the PT Cruiser had were from an ex's bad driving. I prefer the simplicity of taking care of my bike and getting around on it.

I just wish the other people on their bikes didn't annoy me quite so much.

Email ThisBlogThis!Share to TwitterShare to FacebookShare to Pinterest
Labels: Weirdness

Today's musing post isn't pulled from any list, but inspired by looked at a few of them.

There are times where I feel like I have a hard time making decisions; it crops up mostly when I'm trying to buy something for myself. There are certain things that I can reel off and grab because I know I'll need them; others I'll hem and haw and walk away from the opportunity.

All they had intended to do was look inside. The doorway had stood in the alley for as long as anyone could remember, a strange blue wooden door that looked wildly out of place in the gray brick of the building it was attached to.

The building it was attached to was an old tenement house. Alex had lived in the building for all of his life, and he knew that the door didn't connect to the boiler room that was on the other side of the wall. He'd peeked through the door for the first time when he was six; it had been a dare from Rosa, the daughter of a neighbor who was the same age as Alex.
Read more »
Posted by Don Schlaich at 1:00 AM No comments:

Lean Close and Listen to my Earbuds

There are times I wish I was doing a podcast, because then I could be sponsored by Audible. Because I freaking love Audible. I first joined the service years ago, and rejoining recently has been one of the big signs that I've been putting my life back together.

I want to share some of my favorite Audiobooks in my library.

It's time for another item from the "Bare your Soul"-hit list.

"If you had to be someone else for twenty four hours, who would it be and why?"

James loved working at NASA; it's pretty much the dream for any kid who's looked up into the sky at nights. He got to do things that most people in the private sector would be astounded by, designing and creating machines that rivaled the greatest wonders of man in how much of a beating they could take. The biggest problem? A workplace full of Star Trek Geeks who had just been given the mother of all straight lines:

Falafelling flat on your face

I've eaten a vegetarian lifestyle at times, some of it was at the urging of my partner at the time. The rest of it? I think I just wanted to try it, I even ended up having a vegetarian Thanksgiving that year. There's one recipe that I picked up from that time that's stuck with me.

I was born with a great deal of advantage that I don't think I really understood until I was well into my late 20's. I grew up in the suburbs, the son of two middle-class professionals; that means that even though they were divorced, things never got too rough. And I had access to one of the better public schools in the country, in spite of stupid bullshit that got us in the news my freshman year. (A subject for another day) I had my driving classes at my high school, though I can't remember if the classes were public or something my parents paid for (Like I said, privileged in a lot of little ways). This was in Michigan, so I was fifteen, and walked out of the class with my learner's permit.

Which I then kept for the rest of my High School Career. It wasn't really something that was important to me, and maybe it was the fact that we only had the one car until I was maybe a junior or senior, but I never took the final step to get my full license until the end of Senior Year and I had a job that was far enough from the house that I couldn't bike to it.

As I roll my bike through the door to my apartment, I don't notice anything wrong at first. That's probably helped by the layout of the one-bedroom that I call home: the front door open directly onto the door into the bathroom. So I adjust my bike in the narrow hallway in the dark, and I'm in the living room before the little details have piled up into a unmistakable conclusion: I had been struck by break-and-enter decorators. 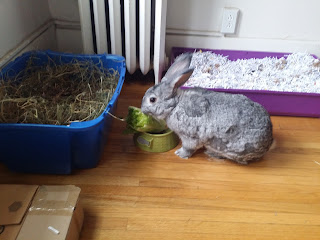 Loki is my 12 pound American Chinchilla Rabbit. He's an adorable little guy who one of my dear friends named "The Lettuce Ninja" after she had to watch him while I was on vacation.

I had rabbits when I was a kid. I did not know how to care for rabbits back then, and was a poor pet owner of them. Rabbits, for how common they are, are exotic pets when compared to dogs or cats. Loki is fed a mixture of standard animal-specific pet food, green and leafy vegetables, and Timothy Hay. The hay is the biggest stumbling block that I deal with in taking care of him; it can be very expensive. When I first adopted him, we bought hay from local small pet stores, national brands that gave me three pounds of hay for ten dollars. It was gone, every single time, every single week.

After that, I went to a local farm supply store, and I bought a bale of hay. It cost $6, and it gave me hay for almost a year. But the hay bales from them is somewhat dried out, so I'm currently getting it from Small Pet Select. It's more expensive, but the hay fills the wire cart that I've turned into a hay hopper for the hopper. He's got free access to as much hay as he wants to eat.

Note if you ever think about getting rabbits: They need to eat primarily hay! This is the biggest mistake I made as a young rabbit owner, not understanding this fact.

Loki's too big to live in any cage that could fit in a one bedroom apartment, so he's a house bunny. I got him from the local humane society litter-trained, so aside from a fondness for wires (and I've had cats that did too), his care is a little like a cat's: feed him small portions, keep an eye on the water, and clean the little box.

And it's worth it. Isn't he adorable?

Posted by Don Schlaich at 1:00 AM No comments:

Email ThisBlogThis!Share to TwitterShare to FacebookShare to Pinterest
Labels: Weirdness

This is something that I've talked about for a long time, and have had a rough path getting towards. In the next year, I want to publish the next novel in the Spellchaser Chronicles. I've been focusing more on my writing in the past several months, and driving myself to get better at both the craft and the practice of writing. And I need to keep pushing on that point until I have results to show for it. The next novel is that, so is keeping this blog active for more than a brief flash of light once every two years.

Because, at some point, I would like to be able to do this as my profession. I'm not sure what that will mean in the long string of time: maybe at some point I'll feel like I have enough out there that doing something like putting up a Patreon won't feel like an absurd move. Maybe I'll start selling enough books that I could get by on what I earn from my book sales alone.

And that's something that runs squarely into my own conflicts with myself. Doubt that I'll ever be good enough, and fear that I'm thinking I'm far better than I am. Like in the back of my head, there's this little voice, "You're just a poser, you don't really value what you say you value. Scratch away the surface, and all of your worst fears about yourself are true." When I can shout down that voice, I know it's just doubt, that I can rise past it, and push myself to actually be better.

That's why I need to keep working, keep that promise to myself. Because every step is putting that doubt behind me, hoping that one day I'll be able to bury it.


Posted by Don Schlaich at 1:00 AM No comments: